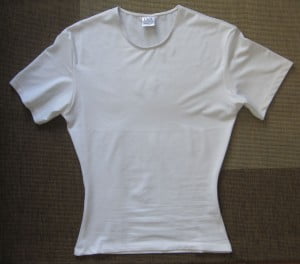 Several readers have either written in or posted comments wondering what I had to say about the Insta Slim men’s slimming crew neck undershirt that I received a couple weeks ago. Well, it’s been patiently sitting by the side of my computer just waiting for me to put it on and give it a test drive and finally the time arrived when I slipped it on and wore it out while Mrs. Tug and I ran about town having breakfast and running some errands this morning!

In response to a reader’s question about the product, I sent him an email with the following thoughts and feedback about the new Insta Slim crew neck compression undershirt:

thought I’d send over some initial thoughts on the instaslim. I wore it today for several hours and overall, was pretty pleased with the product. the one I have is size large, so it was a hair too big for me, but it did a fairly good job in smoothing out my chest and holding in my mid-section. I figure a size medium would have performed even better for me since I normally wear medium sized undershirts.

one thing I find really interesting, is that instaslim looks incredibly similar to spanx for men. I’m not sure which one was released first, but they are very similar in design so I wouldn’t be surprised if one was modeled after the other to some degree. otherwise, it is possible that both companies had the same general idea of what design they wanted and executed it similarly.

the fabric blend is more on the synthetic feeling side being 80% nylon / 20% spandex than the cotton rich feeling of spanx for men, but personally speaking I do like the instaslim being more synthetic because it not only can work as a regular undershirt replacement, but I can also wear it as a base shirt layer when going to the gym. it feels like a short sleeve version of my gc2 compression tank top which I’m a pretty big fan of and something I wear during every workout.

with their current special, you can get two instaslim undershirts for $24.90 each. at that price, it’s a pretty incredible deal for a good performing men’s slimming/shaping undershirt.

I’ve attached some photos and a size comparison that show the instaslim measurements compared to spanx for men. in the photo, spanx4men is on the right in the photo.

hope you find the above information helpful and feel free to email me with any additional questions!

Probably the only nit worth mentioning is the collar width being 1/4″ wide really took away from the asthetics of the undershirt. Most undershirt collars are actually cut and stitched in separately, however, the Insta Slim crew neck collar was a simple fold-n-stitch design. They did a nice job hemming the sleeves and the bottom of the undershirt, but they really missed the mark in stitching the collar.

I’ve been asked by others how Insta Slim compares to Slim T’s. To be totally honest, I think the Insta Slim compression undershirt handles flattening, shaping, and slimming much better than Slim T’s overall. Although Slim T does offer some chest flattening, it doesn’t do a really stellar job of holding in the midsection. But, Insta Slim handle both chest flattening and waist trimming about as good as many of the other slimming undershirts I’ve tried, even being one size too big for me. I have to assume that a medium sized Insta Slim undershirt would perform even better on my physique.

Considering these slimming undershirts sell for around $24.90 each (with their current 2-for-1 special), I think Insta Slim is a very good value for the price.