Earlier this year the folks at Nano-Tex contacted me to let me know about a new (was neutralizert.com) they were planning on releasing.

My name is [removed] and I work for Nano-Tex, a leading fabric innovation company. We saw your blog and found your content very interesting and informative, and thought you and your audience might be interested in our new Nano-Tex Neutralizer T-shirt that we are planning to launch…

Our scientists have engineered a completely new fabric technology that combats body odor.  The Nano-Tex Neutralizer T-shirt filters odor coming through the shirt and eliminates odors on the shirt, so the wearer stays fresh smelling all day long.

If you are interested in checking out the shirt, we would like to send you a sample Neutralizer-T for your review.  We would be interested in your expert opinion of the shirt, and maybe even explore options for your involvement in the product launch 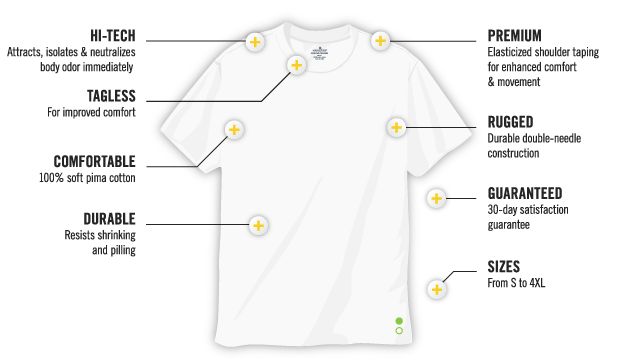 Here’s how it works: Through nanotechnology, Nano-Tex has created a special molecular structure that intercepts odor molecules caused from perspiration. It clutches these odor molecules to prevent offending scents from being released into the air. Plus, it creates a filter that captures body odor traveling through the shirt. When you wash your shirt, the odor molecules are released completely. No, this isn’t a harsh antimicrobial, charcoal or silver additive. Instead, Neutralizer captures the odor molecules produced by bacteria using nano-sized receptors.

What does all that mumbo-jumbo above mean? You won’t stink as much if you wear this undershirt!

If you’ve been here been here before, you’ve probably read about other odor eliminating/resisting treatment terms like “antimicrobial” or X-static (silver-based) undershirts that are naturally anti-microbial. You’re probably wondering what the differences might be. Well after a bunch of reading, I’d sum up the differences in two ways:

I got my hands on a (was neutralizert.com) several months back and gave it a quick test drive. Because I don’t sweat too much and don’t struggle with being too smelly (unless I don’t shower for a long time!), I can’t really tell you how well the NeutralizerT combats smelliness. What I can tell you is that it fits well for a traditional jersey undershirt, the 100% pima cotton feels nice on the skin, and the generous length and narrower width will help this undershirt stay in place better than some other boxy-cut undershirts.

If you’re looking for an undershirt that combats B.O. and one that will keep you smelling fresh and clean, visit (was neutralizert.com) and check out the new NeutralizerT from Nano-Tex.