Although I’ve already provided my initial thoughts of the new Spanx for Men Zoned Performance Undershirt in the comments section of the post where I announced the launch of the new undershirt line, I thought I’d pull those thoughts into an official review article.

Here’s the initial feedback I provided about the new Zoned Performance Undershirts from Spanx:

The new Zoned performance undershirt line from Spanx are nothing like their brother line (the Spanx for men cotton compression undershirts).

These are made with performance/wicking fabric (nylon & spandex) and they have a much smaller, more athletic cut/design.

These puppies are quite a bit more difficult to put on than the cotton compression line. However, they are extremely comfortable after you get them on.

Chest flattening is really good, quite a bit better than the s4m cotton compression line, but very similar to other synthetic blend athletic compression undershirts like Equmen.

It might flatten the hair a bit better though.

Well, my shoulders seem to sit back slightly when I have my arms in the resting position down next to my sides.

Additionally, it helps me sit and stand a bit more upright.

I would compare them favorably to how Equmen pulls the shoulders back.

In contrast, I wouldn’t say it offers more lumbar support than any other compression undershirt.

If you really want lower back support, you should look for other products that focus their support in that area.

Also, since this product is a whopping $20 less than the Equmen line, I have a feeling that the Spanx for men zoned performance line will likely start to chip away at Equmen’s market share. 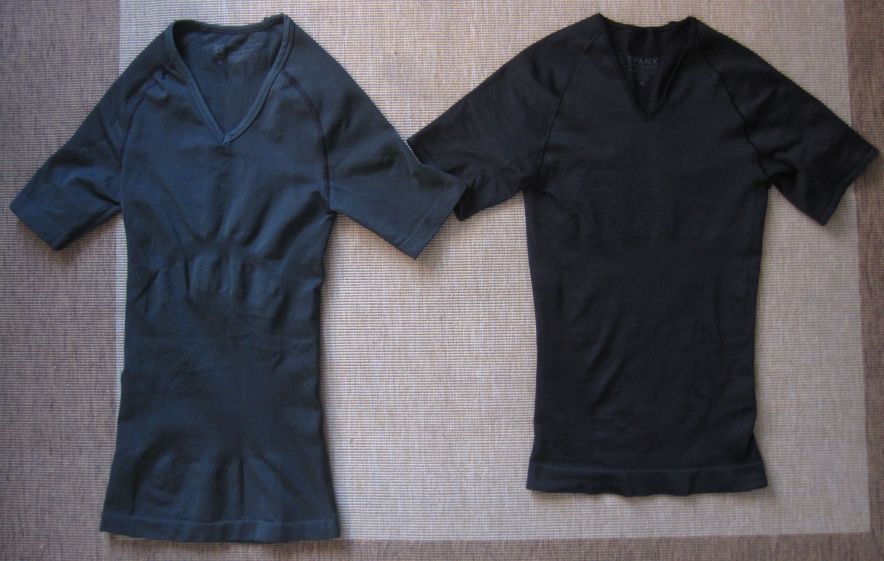 Unfortunately, I have not yet had the chance to wear any new Zoned Performance undershirt to the gym. Likewise, I haven’t worn them as my slimming base layer when going out.

However, as soon as I do, I’ll update this review with more information.

Probably the only thing I failed to point out in my original comments above is that the crew neck and v-neck zoned performance undershirts have ventilated areas.

They are stitched directly into the underarm area and the back (upper and lower back) as illustrated here in the photos below: 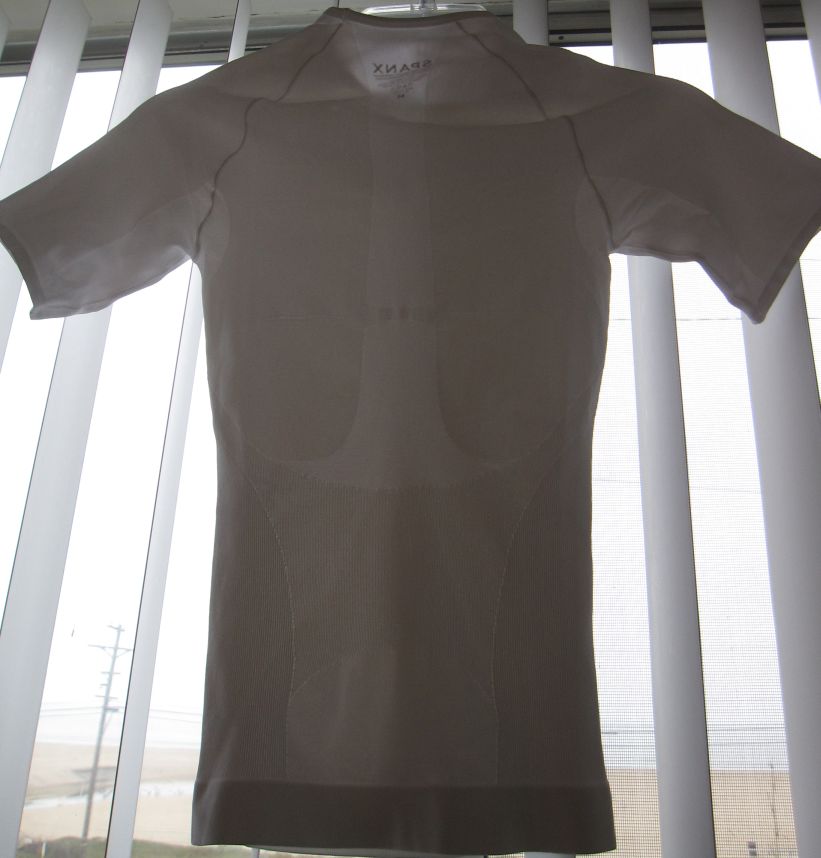 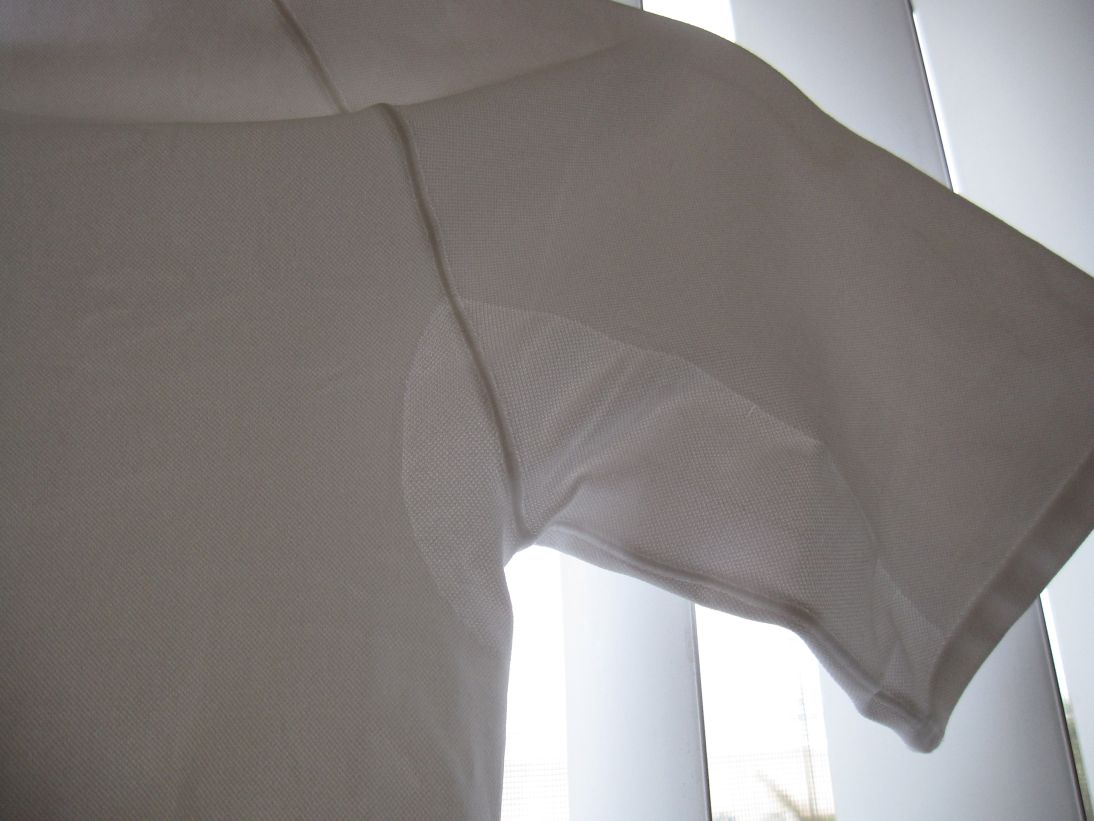 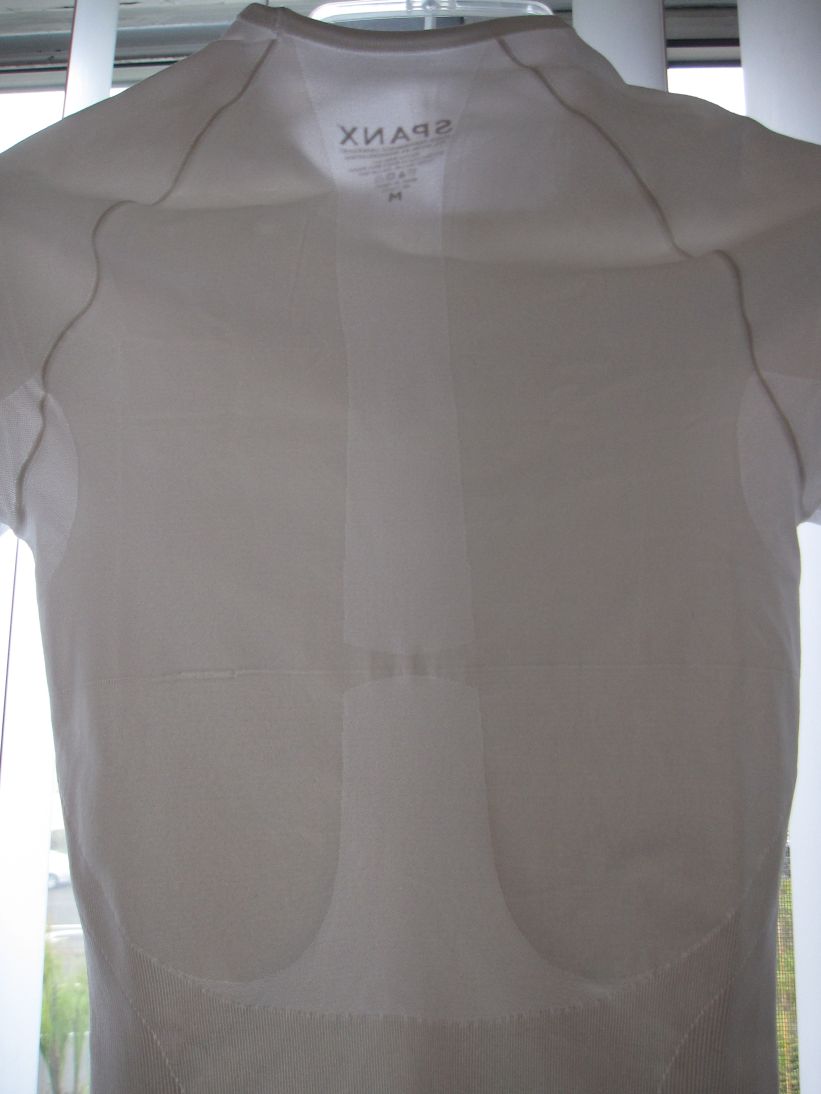 Next time I get to the gym, I’ll be sure to wear one of these and see how it performs.

Update on the Spanx Undershirts

So I wore the Spanx for Men Zoned Performance undershirt all day yesterday.

It really did its job really well, namely – holding in my gut and love handles, along with good chest flattening. Additionally, it was very comfortable.

I never had the urge to take it off.

It did take a bit of persuasion to get on, though. In fact, I decided it was best if I stepped into the tank and pull it up.

I have to say, that feels very “chick-ish”. Specifically – stepping into a tank and pulling it up. Nevertheless, in the spirit of getting you guys some feedback on these shirts, I’m willing to do whatever is necessary.

I was a little worried that I’d get the dreaded bottom “roll-up” effect that you get on many of the compression undershirts. The shirt bottom did roll-up a bit. Namely, it doesn’t have as much length like some others.

However, when it did roll-up a bit, there wasn’t much fabric gathering so it didn’t bother me.

Also, I didn’t feel compelled to pull the tank top down during the day.

I pretty much stayed cool and comfortable all day.

The Not So Good:

If there were anything that I could point out that might be perceived as something negative it would be the damp feeling.

Occasionally, throughout the day I felt, for lack of a better term, a bit “clammy”.

Case in point, the coolness of the Zoned Performance undershirt combined with the synthetic fabric had me feeling that way from time to time during the day.

I’ve noticed this same feeling on several other slimming and fitted undershirts that have a large amount of polyester or nylon.

I guess I’m just used to it, therefore I don’t mention it very often.

It’s very similar to the feeling when you’re wearing an undershirt that has 5% – 10% lycra in it and you sweat a bit. You feel the shirt cling to you a bit.

Next, it feels that the hair is a bit “clammy”. I still want to wear this guy to the gym to see how it performs.

Regardless, I thought I’d share the above information while it was fresh in my mind.

I’m pretty sure they’re sending me a couple of samples of these too.

Once I get the chance to try them out, I’ll post some feedback here on the site!

Here’s a bunch of pictures of the new Zoned Performance Undershirt models in order to see them more up close and personal.