Do you think you bought an original Woodstock T-shirt? Can you tell if your vintage t-shirt is authentic or not? Read on.

Vintage apparel popularity has grown a lot in recent years.

Where there is high demand, there are fraudsters and fakes.

Thankfully, there are sites like Defunkd.com that take vintage apparel very seriously and provide a safe-haven for those of you looking to buy authentic vintage t-shirts.

Not all sellers of vintage apparel are trying to take advantage though — some just don’t know any better.

Case in point, this reader wrote in wondering if got his hands on an original Woodstock t-shirt (authentic, made and sold at the 1969 event):

I need your opinion.

What was the earliest dates for Screen Stars shirts?

It has a Woodstock festival logo black w/purple dove and dates from festival.

I was told it was one of the earliest shirts screened but of course there were no t-shirt sales at Woodstock that can be validated.

I asked Mike for some photos of his shirt, as well as the care label (front and back).

He sent me the photos below with the following info:

This is a shirt I purchased 10 years ago.

I was told it was one of the earliest produced before reg trademark.

I am an old hippy and was wondering if some greedy buzzard took me. 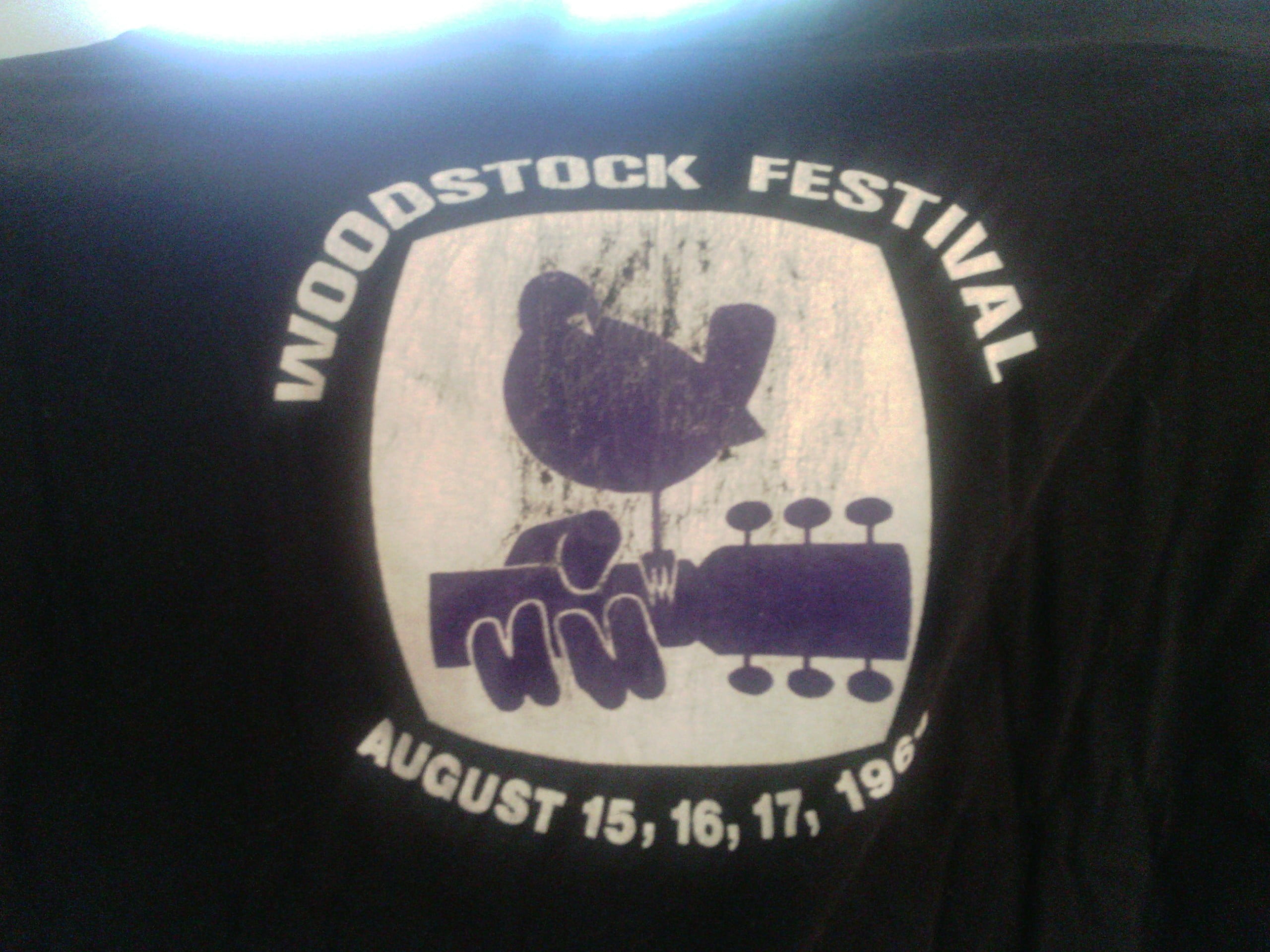 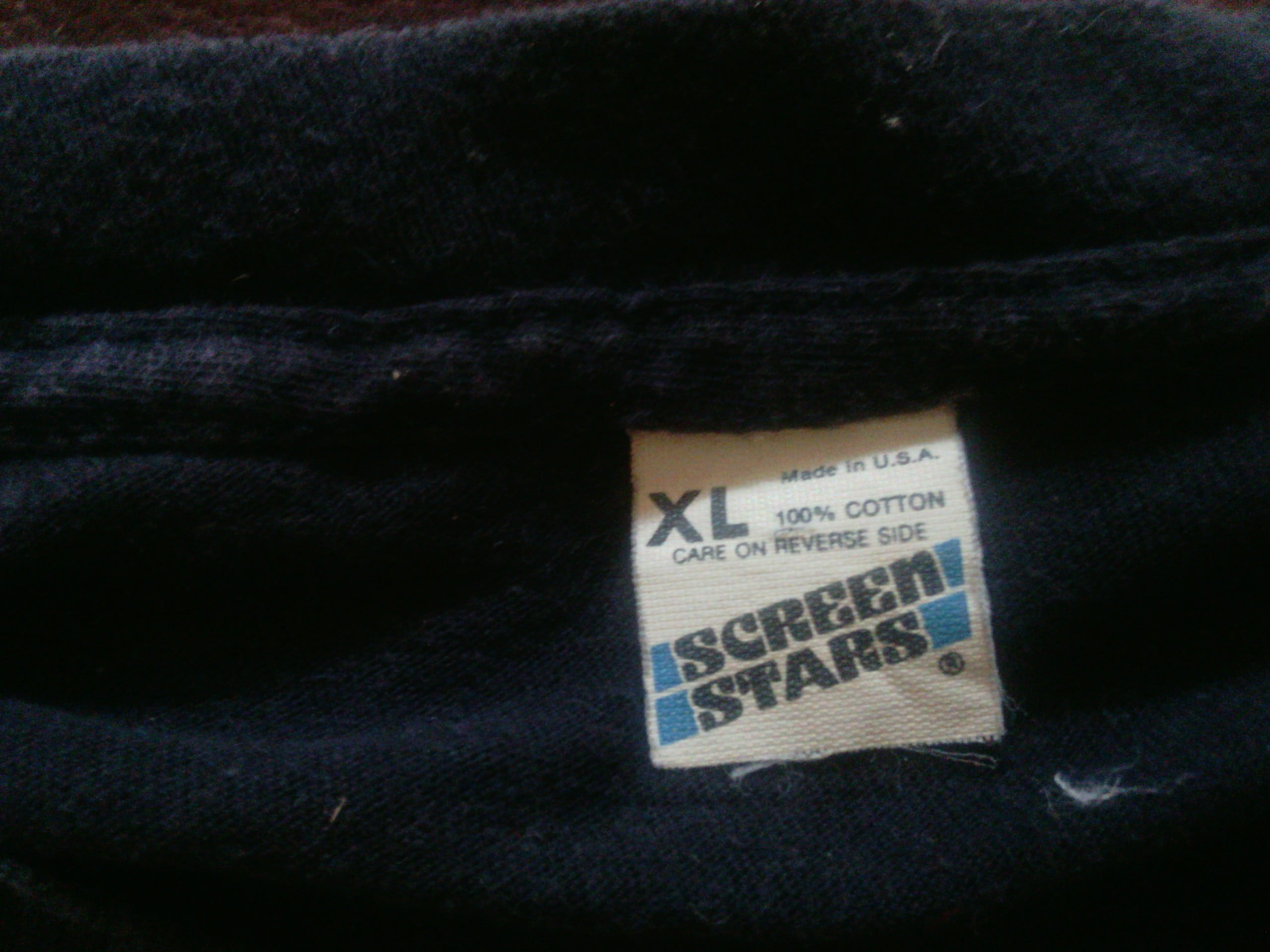 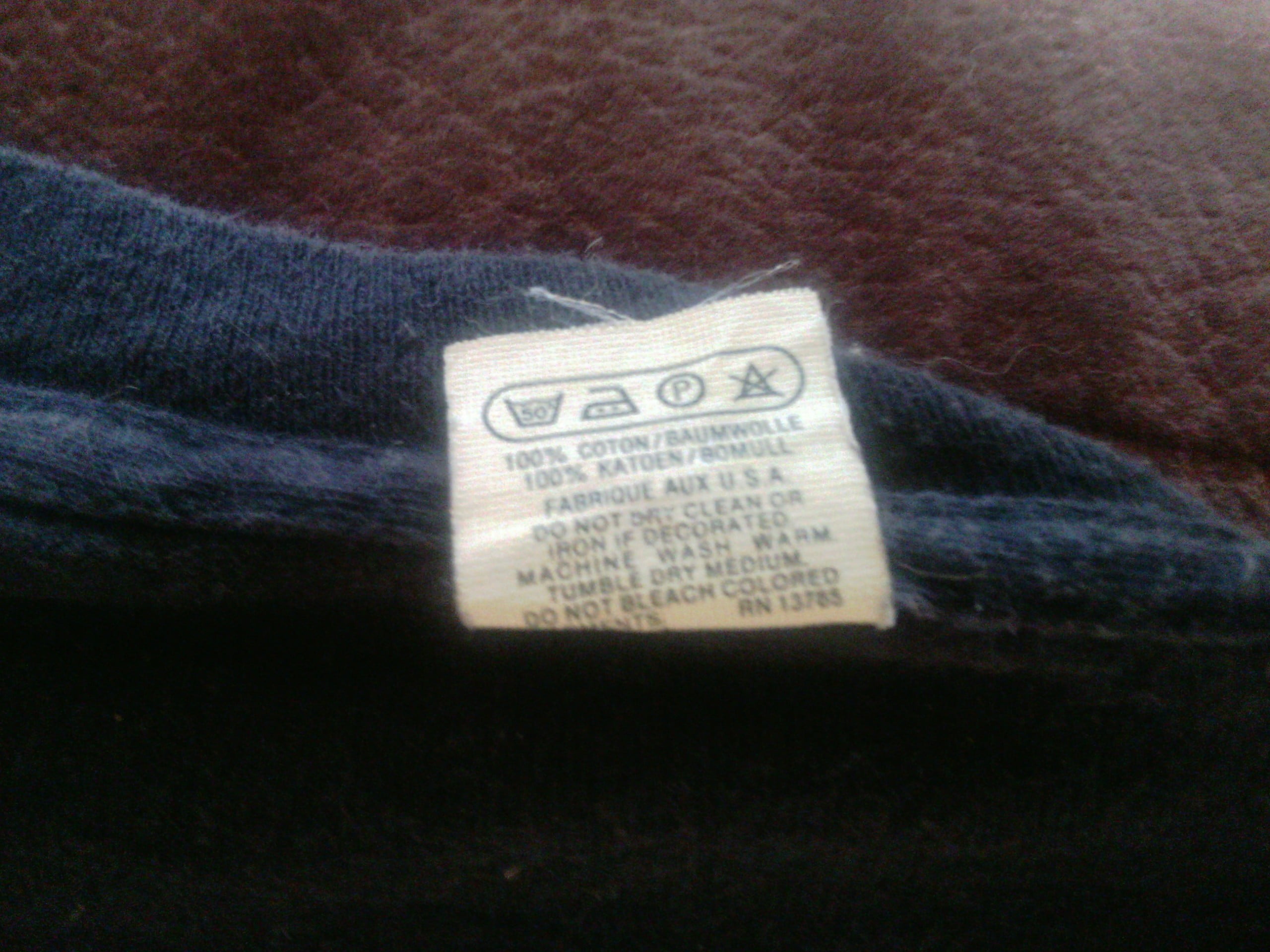 Thanks for the photos.

I’ve forwarded them to a guy I know who’s an expert in vintage t-shirts, especially Screen Stars.

Though, I did a little research myself, and based on what I found, it looks like it’s a Screen Stars t-shirt from the 80’s.

The one good thing, is that it’s very possible that the t-shirt itself is not fake.

Meaning, it’s a real Screen Stars tee from the 80’s. That said, it’s hard to tell when the actual print was put on the shirt.

Here is some information I found on Screen Stars.

http://beginner-diver.blogspot.com/2012_03_01_archive.html
(scroll till you find the tee with the label that looks like yours, vintage bruce springsteen — circa 84/85)

http://www.defunkd.com/blog/2011/08/04/fake-thailand-screen-stars-tag/
(shows a comparison of a bad copy, to a true vintage tee. yours looks more like the true vintage)

http://www.ilovewaterloo.com/t-shirt.php?estampa=Woodstock
(the graphic on your shirt looks similar to this one)

http://www.ebay.ca/itm/Vintage-WOODSTOCK-FESTIVAL-1969-Screen-Stars-Soft-T-Shirt-RARE-/251506901585?
(this listing doesn’t say what year the shirt was made. “woodstock festival 1969” is just what the shirt says, but the seller is legit and that one sold for a pretty decent price.)

Though, let me point out one other observation.

On your t-shirt’s tag, there is a “registered” mark under the Screen Stars logo.

On many others I found, including some of the ones above, they show “trade mark” or TM.

What that implies to me is that your t-shirt is newer than the red one on eBay above because you can’t use the registered mark until the USPTO grants you it.

In other words, “TM” is used well before “Registered” in most cases.

Even some of the 80’s screen stars tags above still have “TM” on them, though some do have Registered.

I checked the USPTO, and it looks like Fruit of the Loom was granted the official registration of that name on 8/23/83.

So, with that, it really does further reinforce that your Screen Stars t-shirt was made after 1983.

Even if it was made in 1984, that means the t-shirt itself is legitimately around 30 years old.

Though, it’s not clear when the print was put on it.

I’m sure more information will come in, but do you want to tell me what you paid for the shirt and I can try to find out if it was a fair price??

I was told 1970 first run before Woodstock ventures reg the trademark.

I contact Jimmy over at Defunkd.com, to ask his sage advice.

He’s the master when it comes to vintage t-shirts, and also knows some details about the official Woodstock t-shirts, so I figured he’d have some good info to share.

And boy, was I right.  From Jimmy…

Funny, the first manufacture date of Screen Stars was a bit of a mystery for a while.

But recently we found a Fruit of the Loom timeline that shows they first made it in 1980. Most of us thought late 70s, but that’s not the case.

It’s likely an 80s homage to the event.

He probably has the t-shirt printed like this one.

That was sold for 7k, but the buyer realized his mistake and it also caused a commenting frenzy on our blog because the majority didn’t believe it was from the event.

Most of us suspected it was a Screen Stars tag although it had been removed:

There’s a photo of a true original 1969 Woodstock t-shirt here:

The staff ones only had back prints with the exception being security, which had “Peace” and a peace symbol on the front.

Hope that helps let me know if you have any others qs.

I mentioned to Jimmy about the Registered vs. Trademark observation I made, and also asked about whether or not the guy who bought the $7,000 t-shirt ever got his money back.

Good eye. Gotta check that out when I get back home.

Yeah, that blue version of Screen Stars was 100 percent cotton.

The buyer never paid. The seller was pissed at all of us. He thought we ruined the sale.

He really wanted to believe it was real original Woodstock t-shirt, especially when 7k was almost in hand.

Unfortunately, what Mike bought was not an authentic Woodstock T-shirt.

But, considering the Screen Stars t-shirt that the graphic was printed on is over 30 years old, I’d still consider it somewhat vintage.

To check out my other articles related to Woodstock t-shirts, you can find them here.