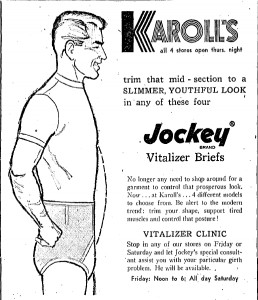 A Tug reader was doing some research for one of his clients, was digging through the Chicago Tribune & Los Angeles Times archives, and came across a series of men’s shapewear underwear advertisements (known then as support underwear) that date back to the early 1960’s and was nice enough to forward them over.

While it’s fairly well known that male girdles have been around since 17th and 18th century fashion, where George IV was known to wear corsets, I was not aware that men’s support underwear had been offered as a mainstream clothing item prior to last year when I was introduced to the mens shapewear category when a UK reporter wrote about Equmen’s core precision undershirt and described it as Spanx for men. Once that happened, the men’s shapewear market exploded and we all sat back in amazement as we learned about all the mens support underwear that had surprisingly been on the market for some time, but had primarily been marketed to men recovering from surgery or as a temporary cosmetic remedy to mask the effects of gynecomastia (man boobs).

Apparently, as reported by the above reader’s father, men’s clothes got rather tight fitting in the 60’s and ’70’s and so manufacturer’s like Jockey, Mandate, and Munsingwear responded by introducing the following men’s support underwear. One thing to pay close attention to is how these manufacturers marketed these products back then, and how very similar that is to how companies are marketing them today — call that a coincidence or just creative copying.

Thanks to the Tug reader who sent these in! Enjoy.

Stay tuned to the site over the next couple of days – there’s another Tug Exclusive coming your way!