Curious of whether or not it’s “proper” to wear an undershirt under linen shirts? Well, you are not alone.

In fact, one of my readers wrote to me seeking advice regarding the dilemma.

Enjoyed reading some of your posts.

One question I had that I didn’t see on your site is should I wear a t-shirt under a white long sleeve linen shirt.

I just bought the white linen shirt, but noticed it is a bit thin and you can see slight skin tone through the shirt.

Didn’t know if it’s best to go without an undershirt, if that’s normally done with these type of shirts, or wear an undershirt even though the shirt lines are very visible.

Should You Wear An Undershirt Under Linen Shirts?

Good to hear from you buddy and thanks for stopping by my site!

You know, your question about wearing an undershirt under a white linen shirt (long or short sleeve) is a good one, and long debated. 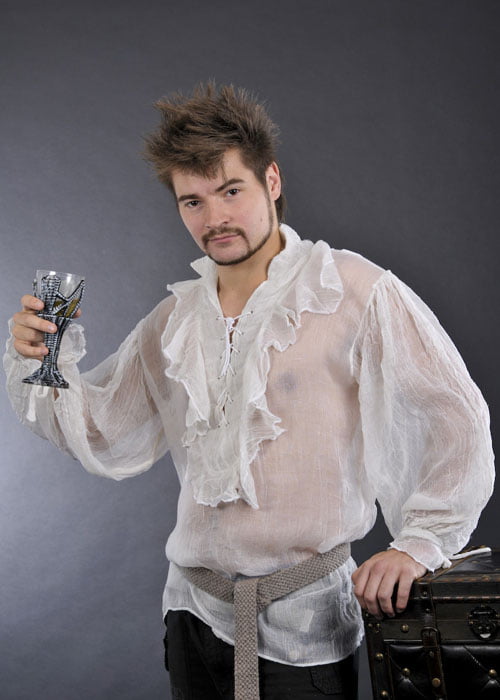 If the linen shirt is not that transparent, then I think you have some options.

If you’re comfortable doing that and you don’t sweat too much, go without an undershirt.

It looks almost similar to your skin and becomes nearly invisible under the linen shirt.

For example, you can choose a neutral colored undershirt, like heather grey or tan/nude beige.

The practical undershirt choice with an open collar is a v-neck, but I wear tank tops a lot in hotter months since most of my sweating occurs on my back and some on my chest.

Even though I sweat some in my underarm area, it’s not quite enough for me to worry about it. As such, I stick with a fitted tank top undershirt.

Another option could be a milk-colored or grey lightweight Henley undershirt.

I’ve not tried this, but I’m curious how it would look under a linen shirt. The button collar on the Henley might look stylish underneath, but I’d have to see it to make a more informed decision

Pick up a contrast colored t-shirt.

Like navy blue or possibly the same color as your pants.

If you did this, it would look more like a stylistic choice, and you could get away with a crew neck undershirt or v-neck undershirt.

For more color selection, you might need to look at t-shirts versus undershirts.

I know Uniqlo and American Apparel have about every color t-shirt you could ever want.

Such an undershirt might look OK, but as with the Henley undershirt idea, I’d have to see it to be more certain.

So, what do you think?

Do any of the above recommendations feel like they’d work for you?

Thankfully it’s not not as transparent as that picture.

It’s a linen Cubavera shirt that doesn’t show any bodily details, but does add a slight fleshy undertone to the white shirt.

I’m inclined to go with your first recommendation and ditch the shirt, but my wife thought it needed an undershirt.

I’m just not a fan of seeing the lines of the undershirt.

So sounds like I could probably go either way.

Check out the following links / websites for more information about wearing undershirts under linen shirts.

5 thoughts on “Wear an Undershirt Under Linen Shirts: The Rules?”