As I mentioned the other day, I hit the jackpot when I meandered around Macy’s and Old Navy and found some really great deals on some undershirts.

Today’s review is on the large gray crewneck 2-pack I purchased at Old Navy for a mere $6.50 (on sale, of course). This made in El Salvador undershirt is made out of 90% cotton and 10% polyester. What I’ve been finding in blends like this is that they don’t seem to shrink very much after washing, which many of us look for in an undershirt. Alternatively we can buy one-size larger 100% cotton undershirts and hope they’ll shrink enough to fit us correctly (which they rarely do). The exception to this general rule, are undershirts made out of lightweight ribbed material (like the wife beater). While these types of shirts 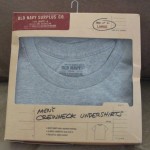 are made out of 100% ribbed cotton and typically shrink, they recover incredibly well after washing and generally fit you as good, if not better than when they came out of the package.

As you know, I’m a big fan of product packaging. For me, it tells a story about the shirt and Old Navy doesn’t disappoint. Very cool light brown cardboard box with a construction/surplus-type of look to it. It also has a plastic see-through window so you can see the color of the shirt. By the way, I really like the neutrality this gray stone-washed color. 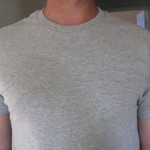 The shirt itself is cut a bit different than some of the other undershirts I’ve reviewed so far. While I typically see large sized shirts cut a bit larger so they fit more body styles, this large undershirt is cut a bit narrower through the torso and waist and fits much better out of the box than many undershirts. Laying flat, the chest (from underarm to underarm) measures 21″ wide. Pictured here to the left (and below) is Tug’s first official undershirt model (no, it’s not me) who stands about 6′ tall and weighs roughly 188lbs. You can see that he fills out the shirt in the chest area, but it does appear to be too tight. On me (not pictured), it fits nicely in the chest area giving me enough room to move while at the same time it’s not so large that I feel it’s too big for it to fit comfortably under my clothing. The other thing I like about this undershirt is its strap and sleeve lengths. At 5.5″, the shoulder strap length is perfect for my shoulder width and the 7.75″ shirt sleeves are long enough to protect my outerwear, but short enough they don’t peak out.

The other thing that’s unique about this shirt is it’s extra, extra-long length. The bottom of this undershirt falls an 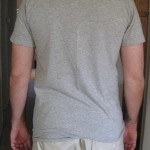 impressive 11.5″ below my waist line, making it the longest shirt I’ve reviewed so far. I also don’t get the feeling that it’s too long for my body (I’m 5’9″). You’ll see that the shirt length looks good on my undershirt model and the shoulder and chest fit him nicely too (he typically wears a large).

After washing (boy Mrs. Tug is going to give me hell for washing individual undershirts), there was some modest shrinkage in the chest width (lost 3/4″ now 20.25″) and in the length (lost 1″ now 10.5″ below my waist line). I will say, however, that the shirt still feels fairly comfortable and doesn’t feel too tight to wear. That being said, I’m a bit smaller (about 175lbs) where I can wear some mediums and smaller larges, so if you’re on the larger side of large, this undershirt might be a little snug on you after washing.

There were two things that I didn’t care for on this undershirt. Typically I like the shoulder seams to lay a little forward of center shoulder. I also don’t mind those shirts that have seams that lay directly on center shoulder. These, however, lay a little behind that and seem to make the collar ride up closer to my neck. Which brings me to my second item, because the collar laid relatively close to my neck, and is not quite 3/4″ in width, it started to roll-under a bit (meaning it did not lay flat) after several hours of wearing.

Nonetheless, I did wind up wearing this undershirt all day long and generally, it was pretty comfortable, even prior to washing. One nice thing to point out — because of this shirt’s color (stone-washed gray) I could wear it by itself out and about without it feeling too much like a typical undershirt.