I have to stand up and applaud the author Fortyfied for her detailed analysis and unique take on this extremely popular article of under clothing.

Here are some of my favorite parts of her article:

Using a wifebeater as something other than an undershirt intended to be hidden from view is generally considered a fashion faux pas.

Decent, upstanding citizens should never be caught dead wearing wifebeaters or similarly revealing articles of clothing unless they are rappers, professional wrestlers, or Olympic weight lifters

This term is often seen as demeaning and is often associated with the similarly derogatory phrase “white trash.”

I think the nickname originates from its association with aggressive, underclass males, usually living in poor conditions as frequently depicted in television shows and movies.

It comes from the notion that the shirts are worn predominantly by stereotypical men who beat their wives.

I speak for myself when I say that the entire world would be a better place without the wifebeater. Could there be anything more offensive in terms of menswear?

Here are some reasons why. The first involves personal hygiene. The undershirt was first conceived of as something utilitarian: to insulate the body with an under-layer of clothing against the cold, and to absorb sweat brought on by heat. Curiously, the wifebeater fails to fulfill any of these.

The low, drooping neckline and the large scooped armholes are way too skimpy to protect against the cold, and by the same reason of lack of coverage, what seems to be the remaining half of a proper undergarment cannot absorb sweat where it matters — under the armpits.

I can’t imagine a man whose sweat pools in his tummy region; it’s a bit of an odd thought…

And how, pray tell, can the wifebeater ever be considered aesthetically sound when it was engineered to expose sprouts of unsightly underarm hair; when its whiteness highlights hideous stretch marks; when it accentuates a bulging belly; and when it flashes the occasional nipple?

So, avid fans of said shirt, take heed: wifebeaters are not sexy and never will be!

Even if the wearer is Brad Pitt, that shirt will not be transformed into anything other than what it really is — a wifebeater. 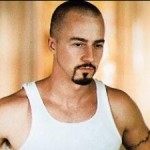 Hold on, though: there may be one exception.

Edward Norton, in his lead role in the movie American History X, is a totally different story.

Because of the character he portrayed, because of the plot, and simply because he is Ed Norton, one of the most gifted yet underrated actors of all time, to my mind, he just might be forgiven — just might.

What, then, may men wear in terms of undershirts?

With these two choices available at the same price, there really is no excuse for the wifebeater to exist, certainly not in your wardrobe.

Although I have to be honest — I used to wear wife beaters all the time (you have to admit they’re pretty damn comfortable).

9 thoughts on “The Wifebeater Undershirt: Would the world be better off without it?”