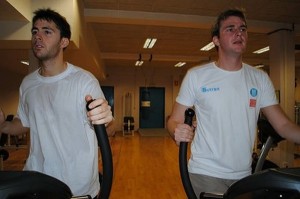 Well this is pretty interesting news that I discovered through my friend Charmaine, and she’s had hyperhidrosis her entire life.  She’s just about ready to launch her website, which will chronicle everything she’s learned about hyperhidrosis through the years, and she’ll also be guest writing here soon to share specific undershirt solutions that are available for women who suffer from the condition. So stay tuned.

Based on the information I read, this new t-shirt/undershirt, cooperatively developed by UPC-Barcelona Tech’s Technological Innovation Center (was www.ct.upc.es) and the company Sutran S.L., has two layers of specially designed fabric (on the entire shirt) that are fused together using a new technique whereby an air chamber is formed between the two layers. Now, what’s very cool about this solution is that it appears the entire shirt is made with double layer protection. Other hyperhidrosis undershirts like Silverback and Kleinerts have double protection, however, it’s usually limited to the underarm and back areas only.

I’ve sent an email to the company representatives to see if we can learn more about this amazing new invention, and if I get lucky, maybe they’ll hook me up with some samples to review. The product seems to be available already at Sutran’s website, but it’s in Spanish, so even with Babel Fish, it’s a little tough to get the details. What I can gather is that the men’s white and black undershirts (was on babelfish.yahoo.com) sell for $24.50 EUR ($32.40 USD) and they come in v-neck and crew neck. They also have a selection for women as well.

5/03/10 Update – I’ve had a couple email exchanges with the folks at Sutran, and they said that they will have their english website up in a couple weeks, so folks from the U.S. will be able order from them when it’s ready. Maybe I’ll pick one up then and give it a test drive!

5/12/10 Update – Sutran’s english website is up. See more information here. Shipping is very expensive for one shirt, but it’s the same cost to ship 5 shirts, so it’s better to order more so your price per shirt isn’t burdened as much.

6/04/10 Update – Another reader and I pooled our money and decided to order a few of these shirts! As soon as they come in, I’ll give you the run-down.  I also just found out that they are now offering the sweat eliminating t-shirts for men in two new colors: green and blue.

7/12/10 Update – Well, after a little problem with getting the initial order in a timely fashion, the Sutran undershirts made it to my friend (“M”) who ordered them! One Sutran undershirt with shipping set be back a hefty $54, but oh well! Now, my Sutran sweat eliminating undershirt is on it’s way to me!  I asked “M” if hey had any initial thoughts and this is what he said:

As for my initial thoughts on the shirts, I think they hold some promise, but I’m withholding further assessment until I’m able to “pressure test” them in more challenging situations. As soon as I’m able to do this, I will definitely let you know my impressions

Here’s the news release about this new sweat eliminating t-shirt:

The UPC-Barcelona Tech’s Technological Innovation Center (was www.ct.upc.es) and the company Sutran S.L. have designed a T-shirt that eliminates sweat stains from clothes, and was specially designed for people with hyperhidrosis.

Everyone remembers the image on TV of a well-known football manager giving instructions to his players from the sidelines with his arms continuously in the air and huge sweat stains on his clothes due to excessive sweat. Hyperhidrosis is a problem that affects the everyday lives of 176 million people worldwide, according to figures from the International Hyperhidrosis Society. 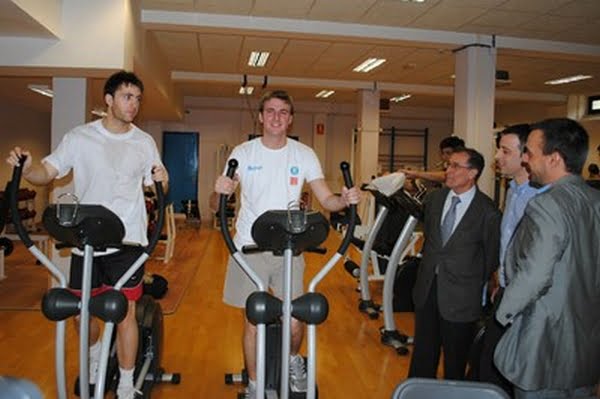 Feliu Marsal, the director of the UPC-Barcelona Tech’s Technological Innovation Center (CTF) on the Terrassa Campus, and the Catalan company Sutran S.L. have created the first T-shirt in the world that, although unable to overcome hyperhidrosis, is able to completely eliminate its main effect: sweat.

An air chamber between two special fabrics
There are textiles on the market that partly reduce the effects of sweat, but they do not completely get rid of it, as is the case of the innovative T-shirt that is already being sold by the company Sutran S.L. The secret behind this surprising innovation in textile design lies in the two layers of light fabric that are put together using a new technique whereby an air chamber is formed between the two layers. The air evaporates and completely removes all traces of sweat, thus keeping clothing dry at all times. The fabric that is in contact with the skin is made of extremely fine porous microfibers, which make it very comfortable to wear. It is also a good heat conductor and has a high absorption capacity. This inside layer likewise undergoes treatment that increases its breathability.

The outside layer looks exactly like the fabric of an ordinary T-shirt. In fact, it is made of cotton, but has a special finish that prevents perspiration from passing through it and makes it waterproof. Finally, the seams on the sleeves of the T-shirt are sewn using a special technique that seals them completely. These specific technical features on the two parts of the T-shirt and the creation of an air chamber between them makes sweat evaporate, thus offering maximum comfort at all times.

History
The history of the manufacture of this revolutionary T-shirt is by no means connected to the textile industry. The idea was sparked off by a Catalan businessman from the building sector whose company is based in L’Hospitalet de Llobregat. As a hyperhidrosis sufferer, he contacted the textile engineer Òscar Deumal to look into the possibility of making a fabric that prevented sweat from passing through it. A few months later, Deumal decided to contact Feliu Marsal, director of the UPC-Barcelona Tech’s Technological Innovation Center. After working together for approximately two years, they finally made the first T-shirt that completely eliminates sweat stains. Sutran S.L. is already selling these T-shirts in a shop on Calle Mas in L’Hospitalet de Llobregat and on the Internet for around €22, depending on the design.

Hyperhidrosis
The human body has four million sweat glands. The brain sends messages to these glands to produce sweat to keep the body at the proper temperature in certain situations. However, people who suffer from hyperhidrosis continue to perspire regardless of the temperature or their state of anxiety. According to the International Hyperhidrosis Society, 176 million people suffer from hyperhidrosis, a condition that makes people sweat six times more than is normal. This problem has direct repercussions on their daily lives: insecurity, embarrassment, depression, and emotional and physical discomfort. Hyperhidrosis sufferers usually experience negative attitudes at the workplace and in their personal lives; their ability to carry out activities such as playing sport or music, or to behave naturally in tense situations is also compromised.