Happy Halloween everyone! Hope you all are ready for some fun and safe trick-or-treating tonight! Man, can you believe the year is almost over?

So, earlier this year I posted news about the new Speed Stick with Stainguard non-armpit-staining antiperspirant. Well back in August, Curtis stopped by to let us know that he was about to embark on a 2-month Speed Stick Stainguard test to determine whether or not the product actually worked. Fast forward 3 months and Curtis is now back with his results and was super kind enough to provide use with a video and photos!

I intended to only take two months, but honestly didn’t think I wore my new shirts as much as normal (due to traveling and not have the Stainguard with me out of town), so I extended the test for another month.

To my naked eye, I had to look really hard, up against light, in order to notice some slight discoloration. It seemed that the camera picked up a little more. Regardless, it is MUCH better than anything in the past in which there was serious yellowing going on after just a month.

I would expect to see more discoloration in the next six-to-nine months, but I feel very confident in saying that Speed Stick Stainguard passed my test.

The first two weeks of wearing it, my armpits felt a little “raw”, as if they were irritated a bit by the deodorant. After three weeks, it didn’t seem to bother them anymore. 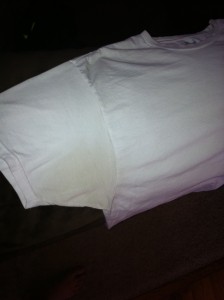 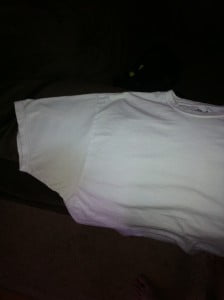 Well, although Curtis said that Speed Stick with Stainguard performed well for him and didn’t stain his shirts as much as his former antiperspirant, in looking at the pictures above, it does appear that it doesn’t eliminate staining completely.

The question in my mind is whether the deodorant caking up (as reported by another reader) and temporary raw armpits is worth switching over. Would be great to hear from more folks who tried Stainguard. If you’re one of those folks, please post a comment below!