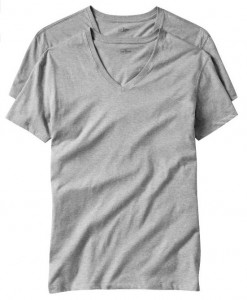 After many years of trying and wearing several different types of undershirts, this particular individual has settled on some heather grey v-neck undershirts from the Gap.

One of the main reasons he likes the heather grey ones is that they don’t show through lighter colored dress shirts as much as white ones do.

It’s a fun/good read, so here you go!

Undershirts are an interesting personal preference for men.

Some go without, some go crew neck, some v-neck, and yet others wife beater or muscle shirt.

I’ve been wearing undershirts under almost everything for over ten years (so you should take my opinion very seriously).

I like the sweat and outershirt protection, the softness of a good undershirt, the slight extra bulk they add (not a problem for everyone, or even most, I realize), and the ever-important nipple coverage.

In my exhaustive research I’ve found that most men start with the classic white Hanes or Fruit of the Loom crew neck. Some move on and some stick with them forever.

I started with the Hanes in my early teens and wore them through my early twenties.

Then something got in my head and I started trying out to other undershirts.

I did the wife beater for a while, and I like how they hug your torso but don’t they do anything for underarm sweat.

Then I moved on to the muscle shirt and those have the same problem but it’s nice to have the wider shoulder “straps”, for lack of a better word.

I don’t, however, like the vertical lines that accompany most A-shirts and muscle shirts. A solid fabric looks much nicer.

The next step was v-necks and that’s what I’ve settled on. I wear them with button up shirts, polos, sweaters, almost everything.

Some men like the white crew neck sticking out over a dress shirt while others think it looks a bit tacky.

I used to do the crew (while doing the Dew) so I can’t fault anyone that chooses to go with it.

However, in my unqualified opinion a nice dress shirt can have its sleekness ruined but a white collar poking out.

It’s your choice but whatever you do, DO NOT wear a crew neck with a stretched-out, wrinkled, or yellow collar. It looks awful no matter what you’re wearing over it.

The participants in my studies informed me that a common issue men have is the awful “undershirt visible through white shirt”.

It’s the male version of visible panty lines. Not good. So here’s a secret to prevent that problem:

Wear a gray undershirt. Really. It seems counterintuitive but a gray shirt will be invisible under most white shirts. There’s some science-y reason why that is but it’s not important.

Here’s another somewhat-weird-and-embarrassing-if-seen-by-others tip you may or may not choose to follow:

This is especially a problem when wearing an undershirt that is too large.

And now for the moment you’ve all been waiting for, the revealing of my current choice of undershirt:

I size down one size to get a closer fit. The V is not too shallow or too deep, they are soft, don’t cost too much (Gap has 40% off coupons regularly), and the sleeves are short enough to not stick out under a polo. Very important.

I also have some Puritan heather gray crew necks I found on clearance at Wal-Mart that are super soft and well fitting. I wear the crew necks under a crew sweatshirt but the Vs are worn a lot more.

There are as many opinions on undershirts as there are actual undershirts out there so experiment a bit and find what you like.

My advice is to spend a few more dollars on nicer undershirts like Gap, Calvin Klein (at Macy’s), J. Crew, and Banana Republic, for example, and they will fit better, wash better, feel softer, and last longer.

And if you end up back with the classic white Hanes crew, great.

TUG at http://www.undershirtguy.com/ has a blog that you should check out to read more about the fascinating world of undershirts