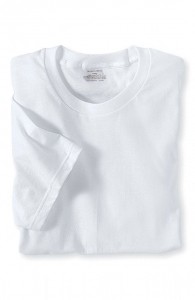 I’ve gotta tell you, this is pretty impressive on Nordstrom’s part. A reader wrote in not too long ago with a concern about the quality of Nordstrom’s house-brand undershirts:

Love the website. I came across it while googling something that has been driving me crazy for the past year or so. Nordstrom used to manufacture their shirts in Canada. They were long, slim, and lasted forever. They’ve since moved production to Honduras and as a result the shirts are completely different. Not only are they sized differently, but they shrink like crazy and fit terribly after a few washes.

Do you happen to know how I could get my hands on the older, made in Canada, Nordstrom undershirts? If not, do you know any other manufacturers that might use the same manufacturer in Canada that Nordstrom used to use? From looking online, I think a company called Musingwear used to use the same one, but it appears they have also decided to go the cheap route and move production elsewhere. It is impossible for me to find well fitting undershirts, and these were perfect, so I’m pretty much desperate and determined to get my hands on more.

If you have any insight, I’d greatly appreciate it!
Thanks a lot.

I reached out to some Nordstrom folks with this reader’s concern, and they were kind enough to route me to brand folks responsible for their private label menswear. Here’s the [incredibly impressive] response I received:

Main Knitting was the company that we used in Canada. They closed their doors to us in 2008.

We since moved our production to Honduras to a very large underwear manufacturer.

With the start up of a new program we did have a few hiccups that have since been resolved.

Please see attached and let me know if you have any further questions.

What the person attached was an internal document that had some Q&A about the quality control measures the Nordstrom Product folks had put in place to rectify the quality issues that had been reported by their customers.

Q: What is NPG doing about the customer complaints/feedback on the undershirt?
A: NPG has addressed all issues identified and worked with the supplier on immediate improvements. Our Quality Engineer found that our supplier was using the wrong type of cutting tools which was causing inconsistency in fit as well as the fabric was not being “compacted” enough during the knitting process at the mill. Both of these issues caused greater shrinkage than we allow.

FYI—the jersey fabric used in this product will shrink a maximum of 7% which equates to an average of -2” due to the openness of the knit fabric. While fabric compacting reduces the openness, as the garment is washed and dried, the “holes” close up which results in the shrinkage rate. We allow for this in our product specifications and have also added 1” to the body length on the crew and v-neck t-shirts.

We also closely monitor production by reviewing all factory & 3rd party testing and also bring samples into our internal NPG lab for additional testing. This is now showing that the factory is consistently meeting our shrinkage, pilling and skewing (twisting) standards.

Q. When will be these changes take effect so our customers will see the benefit?
A. All testing as of early July 2010 has confirmed these changes have been made. The shipments out from the factory from end of late Anniversary deliveries and beyond have all been corrected.

Q: What is the benefit of using Supima yarns in our products compared to regular cotton yarns? How do we know we are getting Supima yarns on our product?
A: NPG switched this program to “Supima Cotton” 4 years ago to deliver finer quality cotton to our customer. The Supima yarn has longer fibers and a softer/silkier hand. Longer fibers also create less pilling. Randomly NPG pulls samples from production and sends them to a 3rd party lab for testing and confirmation that the longer staple yarn (supima) is being used on our products. In addition, the Supima board certifies the supplier every year and issues a certificate to NPG validating that Supima yarns are being used in our product.

Q: Why did you switch from a loop label to a heat transfer?
A: The market trend was moving to heat transfers and we felt the customer would benefit from the comfort of a label that does not rub against their neck.

The fact that the Nordstrom Product folks were transparent enough to share this internal information with me is nothing short of honorable.  In my experience, most larger companies would skirt around quality issues and not address them head-on publicly as Nordstorm did. This tells me that not only do they have a commitment to quality, but they also listen closely to the feedback of their customers and continually work to make improvements to their operations, vendor partnerships, and products to keep their loyal Nordstrom customers happy.

It makes me want to go out and buy a Nordstrom undershirt right now. Considering they are made of supima/pima cotton, have a seamless body, finished with “Ultra Fresh” antimicrobial treatment, and only $10/per undershirt, that’s a pretty good deal in my book.

01/04/11 Update: I just got this email from the reader who originally wrote in with the question/complaint about the Nordstrom undershirts:

hope the holidays treated you well. just wanted to follow up and let you know that i finally went out and bought some more nordstoms shirts after our exchange. they definitely made changes that seem to pretty accurately reflect the document you forwarded me. the shirts are longer and a little trimmer, which is perfect for someone who is tall and slim. ive only washed them once so far, and while the material does not seem quite as good as the originals, it does feel much better than the first replacements and the shirts fit much better overall. it will take some more time and washes to see how they hold up, but overall a big improvement. ill be sticking with them for a while to see how it goes.

im glad i emailed you, otherwise i would never have purchased another set. so thanks again for all your help and good luck with the website. if i notice anything else of interest, i will let you know.