It’s the weekend, and I’m feeling a little lazy.

Even though I know I need to get to reviewing my new buttery-soft Ceceba Diving viscose/elastane undershirt and my eco-friendly, made in the USA, Polarmax moisture-wicking stretch cotton undershirt, I’m taking a mental break.

Instead, I thought I’d share a funny little article I ran across recently that provides a woman’s perspective when she encounters a man NOT wearing an undershirt. Enjoy!

The bride is about to enter the church, but all I can focus on is the man one pew over. He’s cute, with a ruddy complexion and thick, dark hair rivaling the guy in the Head & Shoulders commercial.

The sun streams through the stained glass windows casting a glow on his frame, making him look like an angel. His eyes are a dangerous combination of kind and sexy.

I trace his jaw line to the collar of his light blue, neatly pressed oxford and start working my gaze down his blue, yellow and pink plaid tie. His chest is strong, like bench presses are as common to him as three (protein-filled, probably) meals a day.

And then, at that moment, I am greeted with something so shocking, so appalling it made me forget why we were all here.

He left the house without…an undershirt. His oxford cloth isn’t thick enough to mask his prominent nubs and his necktie does nothing to hide the unruly wiry, black strands that beg to be tamed.

Well, there you go. Nothing like going from Mr. McDreamy to Mr. McDud faster than you can say “I do.”

Doesn’t he know sitting there without an undershirt is like a woman wearing visible panties under her jersey knit dress?

Did his dad not wear an undershirt? (That fashion choice does seem to be, um, hereditary.)

Does he think undershirts are for grandpas, only, and being in his mid-20s makes him too young?

Maybe he believes such a thing is too “Sopranos”?

I bet he thinks he’ll get too hot if he wears one. But instead, he’ll be slammed with a serious dry cleaning bill for all those armpit stains.

Plus, if heat is a concern, there’s always a tank-style undershirt. They do little to protect the pits, but at least they’d keep that pesky chest hair under wraps.

Aw, isn’t that sweet? The groom kissed the mother of the bride before she was escorted back to her seat.

He surely remembered an undershirt under that French cuff button-down. I mean, besides this misfit of a guest to my right, most guys must know an undershirt completes the look, and makes men look more polished … right?

My thoughts drift to that wedding from a couple summers ago.

Near the end of the reception, several of the men took off their shirts and started playing heavy metal music on their air guitars.

I’m not sure who was more horrified — the bride, or her parents.

Tacky behavior aside, their impromptu performance doubled as an underwear fashion show. The aforementioned tank, I learned, came in ribbed and smooth.

One guy was sporting a crew neck style (tagless, I suspect) and the rest opted for V-neck undershirts.

They all seemed to have gotten the message that, if your shirt has buttons, you should be sure there is a little bit of Hanes beneath the collar.

Today’s affair is not that kind of wedding, so I doubt I can use the groomsmen as a teaching moment, but maybe the reception will prove to be the perfect place to pass this oh-so-important fashion tip along to Mr. McDud.

Example of why you want to wear an undershirt….Men do not look like this. 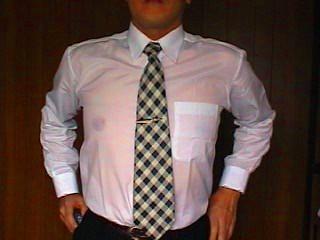