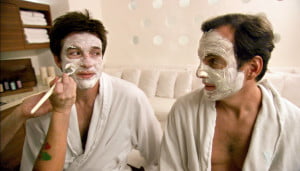 Considering both Will Arnet and Jason Bateman are in it, I have a pretty good feeling the film is gonna be pretty interesting. I think both of them are pretty damn funny.

Mansome: Defined by UrbanDictionary.com as ‘an adjective that describes a man who is both manly and handsome.

Manscaping (Manscape): One of the popular definitions over at UrbanDictionary.com is: to groom a man. Shaving, waxing, cleaning up the superfluous fur.

Oscar nominee Morgan Spurlock (Super Size Me) and executive producers Ben Silverman, Will Arnett, and Jason Bateman present a delightfully entertaining documentary exploring the current state of mandom in America and beyond. Traveling to traditional barbershops and trend-savvy salons across the country and attending an international beard contest in Austria, Spurlock shows us the art of being a man is taken to new hilarious levels.

See the Mansome page on TribecaFilm.com for more information about the film.

To Groom or Not To Groom?

Now, that’s a really good question! Personally, I stay pretty well groomed – uh – all over (bad visual, I know!). I just feel cleaner. I’m not quite a manicure, pedicure, waxing, facial peel kinda guy (yet), but equip me with some facial scrub, a beard trimmer and some tweezers and I get pretty dangerous.

From my early teens, I’ve always felt that if it’s ok for a woman (and preferable) to beautify herself with some strategic grooming why the hell wouldn’t it be ok for me to?

I just hope I get to see this film.