Here are some Kickstarter campaigns that you should keep an eye on: 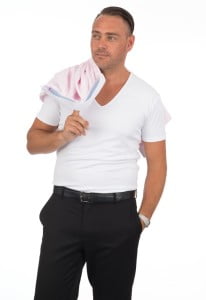 My buddy James and I have been exchanging emails about sweat-blocking undershirts since early this year.

He lives in Japan and says it’s absolutely hell there in the summer with the heat and humidity.  People are packed into public transport like sardines and due to high temps, men (and likely women too) sweat through their clothes like it’s nothing.

James was looking for an undershirt that provided all-over sweat protection. He tried Kleinerts as well as Sutran, but neither met his needs entirely (I’ll likely write more about this sometime later).

The other suspects, like Thompson Tee, Sweatshield, Feel U, Sweaty Man, Armpit Armor, and Go Softwear only offer protection in the underarm area.

Since he couldn’t find what he was looking for, he decided to make one himself. Check out his Kickstarter (link) for more information about NanoDri. 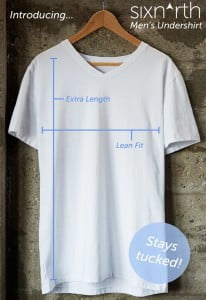 Andrew is making undershirts built exclusively for taller guys. But that’s not all, he also wants to create an entire line of clothing designed for tall men.

At 6’2″ tall, Andrew has tried a lot of undershirts. He’s even tried some of the premium undershirts that claim to be longer.

Unfortunately for Andrew, he found them to be too skin tight/clingy, and still not long enough to reliably stay tucked. He’s a modestly built guy, so he wanted an undershirt that would fit a bit more modestly.

Not finding what he was looking for, Andrew partnered with a boutique manufacturer in Peru (Lima) that specializes in fine Peruvian cottons, to bring the first sixnorth apparel shrink-resistant cotton/spandex undershirt to market. He’s using Kickstarter to fund the initial development of inventory.

A notable mention over to an enterprising young man, Josh Barach, a student at the University of Southern California, who decided to exclusively wear his bathrobe during his summer tour of Europe in 2014.

Looks like he got a lot of buzz and notoriety from his bathrobed escapades, so he decided to launch a Kickstarter to fund the development of a 100% Silk Robe worthy of The Crusader’s namesake.