Is it possible that Hanes would be interested in buying a stake in Spanx for Men? (courtesy of bnet.com)

When it comes to economic indicators, Alan Greenspan is as much a student of human behavior as he is of crunched numbers. In fact to predict boom or bust, the former Federal Reserve chairman actively studies trends in dry cleaning and men’s underwear; the latter because as a basic necessity sales are usually steady. Greenspan’s barometer proved right last year when the (ahem) bottom fell out of sales on boxers and briefs. But times, like underwear, are changing. 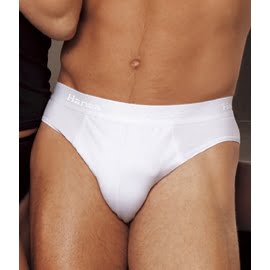 Hanesbrands (HBI) just posted sales gains in nearly every segment for the first quarter. Innerwear led the pack at $33 million -– most notably with a double-digit increase in men’s skivvies. Combined with better margins, the company’s now back in the black.

Winston-Salem based Hanesbrands is further projecting modest gains (was on industry.bnet.com) of 5-8 percent for 2010 due to increases in shelf-space and distribution. What’s interesting is that Hanesbrands’ brass is also exploring a strategic acquisition. “If we see the opportunity to purchase something at a good price that has supply chain synergies and growth potential, it could be a good way to create value,” chairman and CEO Richard Noll said. The ideal company would be in the $200 million range.

If so, Hanesbrands would do well to look at companies that would enhance its “big” winner -– the plus-sized segment. Hanesbrands’ Just My Size apparel drove its retail casualwear sales to nearly 50 percent growth in the first quarter – and the market for apparel and intimates in sizes over 14 continues to grow.

Conversely, with its hosiery segment in decline Hanesbrands might look to snap up a stake in the Spanx company. A deal with the likes of Sara Blakely’s steadily growing Spanx for Men foundations brand could nicely sweep the regular and plus-size markets’ demand for slimming underpinnings.