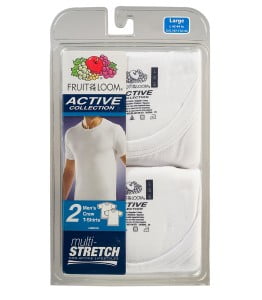 News just in from a reader who saw Fruit of the Loom Active crew neck undershirts at half-off, and was curious of whether or not they were being discontinued.

A few months ago I was reading on your website… I check it periodically to find a replacement for my 95/5 Joe Boxer platinum tees. I’ve tried the Hanes, Apt9 and the Jockey shirts but the closest thing I’ve found to them are the FOTL Active 2pk.

I like shirts that fit like a glove. Upon buying some more I pleasantly saw they were half off on Amazon. But then to my surprise they’re on clearance on the Fruit of the Loom website. As well as their entire “Active” line.

My question is… Is fruit of the loom discounting these? I just found a good replacement and now I’m afraid they won’t be available just like my old Joe Boxer platinum tees.

heya manny, good to hear from you buddy and thanks for your question!

in the meantime, you might want to checkout this product:

another reader wrote in and said that this is one of his favorite stretch undershirts.

if you decide to try it out, be sure to write back and let me know what you think of it, ok?

So Manny got back to me, said he snatched up ten 2-packs of the Fruit of the Loom Active crew necks. He also said he’d be trying out the Dockers undershirt and sending me some feedback.

I emailed my contacts at FotL, and instead of confirming whether or not Active was being discontinued, they mentioned that some new products may be coming out sometime and they’d get back to me. That was about two weeks ago, so I’m not sure what their plans are.

More to come I’m sure…in the mean-time, if you’re a fan of 95/5 cotton/spandex undershirts (crew neck), I’d recommend grabbing up some of these.

They’re super comfortable and at less than $4/undershirt — they’re a spectacular value.

Heard back from my contacts for FotL and they confirmed that the Active Crew undershirts were “phased out of all major markets at the end of 2013.”

Why? “Fruit of the Loom is consistently seeking opportunities to improve our portfolio based on an understanding of market trends and consumer needs.”

In other words, it must not have performed very well.

No specific word on whether or not this product will be replaced with something else, but they did promise to keep me posted.