Be sure to checkout the additional reference articles at the bottom of this article. 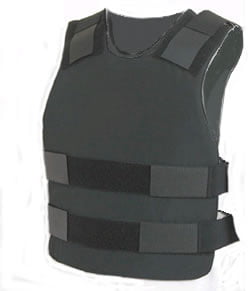 I thought I’d provide an update on a topic we started discussing back in September about wearing UnderArmour undershirts under police kevlar body armor.

The article started after I saw a blog post from a Roanoke, Virginia police officer who was describing his experience when wearing UnderArmour under his body armor.

We exchanged some emails and pulled together some great information.

In the process, Brian, a florida police officer joined the discussion to share some of his experiences with various undershirts.

Well he and I have been emailing back and forth and he recently sent me the following update:

Sorry you haven’t heard back from me in a while, work’s been hectic.

I tried a couple different shirts over the last several weeks and I tried the Jockey one you mentioned below. [tug: the Jockey 3D Physique Crew Neck]

Overall, I think I like the Jockey one the best for under the vest.

I liked the Equmen one also but the Jockey works a little better for me. Plus, although the money wasn’t my deciding factor, it’s foolish for me to spend $100 when the $25 shirt is doing a better job.

Regarding the Equmen size, I had already ordered it when you mentioned the size thing; if I ever got another one, I would definitely order one size smaller [tug: i think he meant bigger], especially since I’m not using it for the slimming effect.

There was one other shirt I liked and it was also about $20. I got it at JC Penny and I think the brand name was Roberts or something like that.

It’s late right now and I don’t want to wake up my wife looking for it to make sure of the brand name, but I’ll let you know.

It was nice because it actually felt like cotton while wearing it, even though it is made of some kind of wicking material. Most of the wicking shirts feel like a weird plastic spandex.

Lastly, one of the guys at work swears by the Walmart Underarmor knockoff for $10, but I haven’t tried it yet.  Plus, he’s a cheapskate and may like it just because of the price, so I’m not expecting too much.

At this point I think I’ll order five or ten of the Jockey’s to keep me going for a while.  Summer’s been brutal this year with the vest on.

Thanks for your help, and if someone comes up with an end-all beat-all under the vest shirt, please let me know.

One last thing, my weird old under the vest tube-shirt ripped this week so I can’t wear it any more.

If you have any friends in the undershirt business that want a new idea to try, let me know and I’ll send you my old tube shirt to show them.

I think the company that made them originally went out of business, but maybe the market has changed.

Who knows, maybe someone else could make something of it. I know I swore by it…

I emailed him back because I wanted to throw out a couple other recommendations.

I had forgotten that Execwearonline.com offers a lightweight nylon blended undershirt that they market to police officers and the military.

I also wanted to be sure he new about the new RIPT Fusion as well.

He sent back in some additional observations that I found very interesting. Here’s his email:

My work schedule changed a bit and I haven’t looked at my email in weeks but since everyone in my house is sleeping right now, I can catch up on things.

The $20 shirt at JC Penny was a Russell Athletic Dri-Power shirt, but Russell apparently makes several types of wicking shirts.

Unfortunately, I can’t find anything on the shirt to distinguish it from their other ones, but the one I got from JC Penny feels like a cotton shirt (even though it isn’t).  I bought one of Russell’s other type wicking shirts from Sports Authority and it’s just like everyone else’s, not better or worse.

I also tried out the Under Armor Heat Gear shirts, good also, but a little thin to wear under the vest.

Of the five or six different types I’ve tried so far, I’m still leaning to the Jockey shirt [3D Physique] you told me about.

I haven’t had a chance to try either of the shirts you listed below, but I’ll probably order one of each in the next week or so to try them out.

Holy Crap, it’s been hot out there over the last two months.

It’s funny, there is one side effect to using these wicking shirts under the vest that I never thought about.

When I wear a cotton t-shirt, I feel like a wet sponge all day, the shirt is sopping wet at the end of the night and the vest gets a little wet but not too bad (I guess the t-shirt is soaking up the moisture).

When I wear the tube shirt, I feel good all day (although it’s a little itchy because of the material they used), the shirt is pretty dry at the end of the day except for the tubes, which seem to trap the moisture and are wet, and the vest stays pretty dry.

When I wear any of the wicking shirts, I feel good all day, the shirt is wet at the end of the day but I don’t feel it, but the vest ends up being soaked.

That’s the thing I didn’t expect.

I have two vest covers I used to swap out about once every two or three weeks, now I’m having to swap them every week, sometimes twice a week. I guess the wicking shirts are wicking the moisture right off me and onto the vest cover.

When I get the ones you mentioned below [Execwear, RIPT Fusion] I’ll let you know how they work out. In the meantime, I’ll try to stay in the shade.

15 thoughts on “Ask Tug: What Kind of Undershirt To Wear Under Kevlar Body Armor?”