Note: If you’re looking for a 84/16 Nylon/Spandex performance shirt, like the one issued in the Marines, checkout the Execwear CoolNylon undershirts.

Back a couple months ago I received the email below from a U.S. Marine looking for a specific undershirt he wore in the military.

He couldn’t locate it anywhere, so he decided to email yours truly to see if I could help.

I have been looking everywhere for a specific kind of military shirt.

In the Marines, we called them “Tacticals” but Im not sure what they are actually called.

The shirt doesn’t have a tag, its printed on the shirt and it reads;

would you happen to know where I could find this?
– M

thanks for writing in with your question.

I don’t know off hand, but I can look into it to see if I can find something out. can you tell me a little bit about the fit, feel, performance – the things that you really like about it. 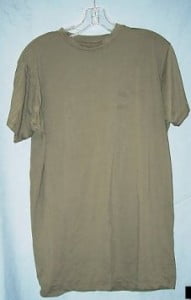 Its cool and breathes really well. Its not as tight as underamour, and there’s no cotton in it.

Its a godsend in hot weather environments.

Its also pretty inexpensive if i do remember correctly.

But its also authorized (or at least it was) to be worn in uniform.

sorry for the delay in getting back to you.

I was in the process of moving to southern california when you first emailed me.

I did a little research and I found a contact at the manufacturer. I’ve emailed him and will see if he will return my inquiry.

if we are able to get some, do you know any other marines who would be interested in ordering them?

does this look like the undershirt/t-shirt you were looking for?

Email sent to the manufacturer (Tug)

I run a fairly popular men’s undershirt blog in the U.S. and a reader wrote in who wanted to find out if there was any way to purchase the Tacticals t-shirt he was issued in the Marines.

In doing some research, we found that your company manufactures them.

here are the details of the t-shirt:

it would be a great success if we could help this marine out and get him some more of these undershirts/t-shirts.

also, if we had to order some minimums, I could probably collect a bunch of guys who would like to order them.

is there any way you can help?

Thank you for contacting us.

Please allow me to request permission from DoD, since specifications belong to them.

I will let you know within the week.

Second reply from the undershirt manufacturer (One month later..)

Hope everything is great!

I apologize for taking so long to answer on the Marine Tactical T-shirt, but the government took some time.

Please have your reader contact us and we will gladly sell him the T-shirt.

Well, I’ve emailed the original reader and provided J’s contact information to him so he can get his t-shirt!

I’ve excluded the manufacturer’s direct contact information from the post so they don’t get spammed, but if you’re also looking for the same military tactical undershirt as mentioned above, email me and I’ll make an introduction.

In writing this post, I just remembered there is another nylon undershirt that may be suitable alternative.

Coincidentally (or maybe not-so), the nylon undershirts made by Execwear have the exact same fabric blend (84% meryl nylon, 16% lycra) as the Tactical t-shirt noted above.

I reviewed their black undershirt about a year ago, and overall, I thought it was a pretty good undershirt.

I’ll have to email M and let him know!

So, it looks like the manufacturer above doesn’t have any remaining 84/16 USMC Tactical T-shirts.

A few readers have reached out to them over the last few months, but they haven’t been able to purchase any.

Hopefully a company will offer something similar in the not-to-distant future, and once they do, I’ll let everyone know.

39 thoughts on “Ask Tug: Marine Corps Military Tacticals Undershirt. Where Can I Find One?”