Not bullet proof. But yes, a bullet resistant undershirt! Now I’ve seen everything.

Here’s the press release that got my attention:

Armor TEE will be providing NFL players with Bullet Resistant Undershirts in response to the NFL players and NFL Management’s concern for safety off the field.

These Undershirts are similar to those launched by Armor TEE in October of 2008 to grade students in the wake of the recent school shootings.

NFL player’s visibility and wealth have made them prime targets with recent reports of players such as Plaxico Burress carrying illegal handguns for protection.

As recently as last week, NBC reported, Giants Wide Receiver, Steve Smith, was held up at gunpoint in front of his home.

Armor TEE does not believe their undershirts will solve the problem but it would offer a very realistic approach and an immediate alternative for the players.

NFL Team’s Management has not been particularly keen to the fact that their young players and investments have to resort to carrying handguns.

So they believe a product like this would offer a more passive approach than their player’s carrying illegal weapons.

What is the ARMOR TEE undershirt? 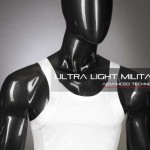 The ARMOR TEE undershirt is made up of two parts;

How does the ARMOR TEE undershirt work?

In simple terms, the ballistic fiber (MLIT2) used is strong enough to deflect the energy of a bullet or a knife attack.

Without the pads, the undershirt provides no attack protection whatsoever.

The first is a tank-top design. The second is their Level B version which offers more body coverage in the upper torso and back area.

Click on the image to the right and watch a YouTube video of the product in action. It’s pretty impressive if you ask me.

For now, you can only purchase the product on the company’s website.