Although not an undershirt, I thought this new 2xist product announcement was worth sharing with everyone since it’s in the mens “shapewear” category. 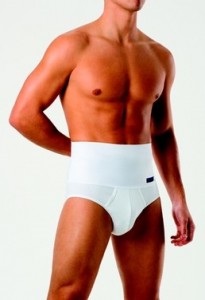 Hitting brick-and-mortar and online stores in August [2009], 2xist’s four-sku range, called Form, consists of brief and trunk styles equipped with a 6-inch elastic waistband designed to give the wearer a sleek appearance.

“It targets an area that most men typically have trouble with and can whittle the waist two whole inches,” said Jason Scarlatti, 2xist’s creative director.

An innerwear brand with a fashion bent, 2xist launches new collections nearly every season, but Form marks a departure for the company, whose sleek, colorful briefs are marketed to men who are already in good physical condition.

“Not everyone is shaped like the guy on the box,” Scarlatti explained. “This is for an aspirational customer; it’s a stepping stone.”

Male shapewear, Scarlatti explained, is fueled by both the increasingly body-conscious styles in men’s wear and the parallel success of shapewear in the women’s market. The latter is best represented by Spanx, the Atlanta-based company whose body shapers for women ring up $350 million at retail.